The Testoons of Henry VIII

The Henry VIII testoons have always been popular with collectors and they are a personal favourite because of the imposing portrait of the king. I have compiled a few notes about this interesting denomination below, it is not intended to be a detailed study of the coinage in any way as this has been comprehensively covered by others. Please see the list of references for further reading and more information on the subject.

Debasement and the introduction of testoons

The beginning of the 1540’s saw Henry VIIII attempting to fund wars with both France and Scotland. Considerable fortunes were reaped from the dissolution of the monasteries, heavy taxes were imposed and much of the crowns land gained in the 1530’s were sold off.  But despite all this, Henry was still unable to raise the money necessary and so he turned to the coinage to find additional revenue.

A secret indenture was first ordered in May 1542, and this called for the minting of both gold and silver coins at a reduced fineness (the silver at 9 oz. 2 dwt.) and for the reinstatement of the testoon, a denomination that had been trialled under the reign of Henry VII with little success. Reducing the fineness of the coinage meant that the crown could benefit as the cost of producing coins of any given denomination was reduced due to the reduction in silver content. For the next two years the new testoons together with the other debased coins were minted in secret and stock-piled at the Jewel Tower in the Palace of Westminster whilst production of coins at the 1526 silver standard continued in parallel.

Lack of bullion arriving at the mint meant that by May 1544 the indenture was officially proclaimed and the baser coins including the testoons were finally released to the public. The larger profits made by the coining at a reduced fineness meant that the mint could then offer higher prices to attract bullion, and significant quantities of testoons were produced as a result of the increased supply.

The further need to raise even greater sums of money meant that in March 1545 the coinage was further debased, the silver to 6 oz. fine, and in April 1546 the standard fell again to 4 oz. fine. The York and Canterbury mints were reopened in May and June 1545, and in July and additional mint was established at Southwark and another mint was added at the Tower to help with the recoinage. In May 1546 a further mint at Bristol was opened under William Sharington. No testoons were struck at York or Canterbury but were produced at the other mints, namely at the Tower, Southwark and Bristol.

In 1537 the 40 year old German born artist, Hans Holbein, painted the most famous image of Henry VIII ever produced. Not only was it remarkable for the representation of the king’s clothing and finery but it was the pose that was so unusual and unique in royal portraiture. Such a stance, full faced, legs apart, fists clenched, was considered vulgar in the courts of Europe and was regarded as appropriate only for representing romantic heros and fully-armoured knights. Holbein’s original design had the king appearing three-quarter face and it must be assumed that the change was made at Henry’s command. The imagery gives Henry a commanding presence and it is this image that people think of in relation to Henry VIII today.

This impressive piece of propaganda was originally completed for the Palace of Whitehall, but it has been widely copied since and also used in a modified form on the testoon. When seen on a coin that was fully struck up with clear details, it is also one of the most powerful portraits in the history of British coinage. Slight variations can be found in the portrait of the London testoons:

This is generally the most common of the three busts. The king has prominent locks of hair showing on each side and open eyes. The face appears well balanced probably due to the locks of hair. This bust is the most common but there are two main varieties which I will call bust 1a and 1b. The first only occurs on early coins and has a much deeper fur collar which comes further up the sides of the face which is fatter or wider than on those with bust 1b. 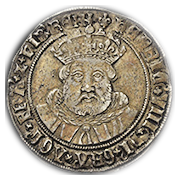 Bust 2 appears narrow at the top of the head and heavy around the jowls thanks to small locks of hair below the crown. The king has a deep frown and eyes partly closed. 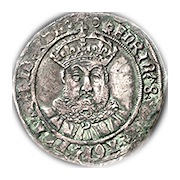 The crown of bust 3 is different with large pellets for ornaments on the arch of the crown and no jewels to the lower band. The beard is coarse and comes further up the face at the sides and the hair is again sparse below the crown. 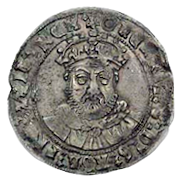 I have made no attempt to detail some of the more unusual combinations of bust, stops and mint marks etc. sometimes found in this series, for further details please see [2]. Instead I have outlined the generally accepted grouping with details most often found on coins of these groups. Note that the portraits appeared chronologically in the above order but don’t neatly fit into the groups described by Stewartby [2] though there is good argument for this grouping based on the legend inscription and stops.

Posthumous issue, as B but with lozenge stops, mules only
Bust 2 or 3, mm. pellet in annulet
Fineness: 4 oz.

Group B coins with bust 1b are overwhelmingly the most common. Sometimes an annulet can be found on the inner circle of the reverse of later coins of group B and it has been suggested that this may signify the reduction to the 4 oz. standard.

As the period of debasement progressed, counterfeit coinage became an even greater problem than normal. The counterfeiter was effectively able to do illegally what the government was doing legally by debasing the coinage, and they could produce coins that were as good as the official issues and still make a good profit.

In a proclamation of 10 April 1548, the government claimed that ‘fraud and corruption hath of late time been used in the falsing of his highness’ and called for the demonetization of testoons by the end of that year. Though this was the official line, Challis [3] was unconvinced of the government’s explanation and reasons that counterfeiters could soon turn to producing other denominations (as all were debased) for profit, and he argues that fiscal policy was behind the proclamation.

The government’s plan was to ‘convert’ testoons during 1548 to the then current 4 oz. coinage of groats and smaller denominations but because the deadline for demonetization was not set until 31st December 1548 people continued to use them and so conversion was initially slow. The crown was again in a position to profit by the withdrawal of testoons because those in circulation were of either 9 oz. 2 dwt., 6 oz. or 4 oz. fine and the coins that were to be re-coined from their withdrawal were of 4 oz., or soon the finer but lighter weight 8oz. or 6 oz. standards introduced in 1549 for the shilling. A profit was thus made on the conversion operation and Challis sets this out in some detail. He estimates that the government might have expected one testoon of 9 oz. 2 dwt. or 6 oz. to be brought in for every one of 4 oz. fine giving a profit of 1 ½ oz. of fine silver per lb. gross.

In practice the operation was less profitable than hoped. Bullion to the mint was once again in decline and silver output from the mint was down, so in October 1548 the government raised the price the mint paid for silver. As such many of the finer testoons were melted privately and were sold back to the mint as bullion at a profit instead of being surrendered as demonetized coin!

It should be remembered then that the testoon was struck in very significant numbers, yet its subsequent demonetization and withdrawal has meant that it is quite scarce today. Of the examples surviving, many are in a poor state of preservation due in part to the composition of the alloy and wear. The quality of production also meant that many coins were only partly struck up and were often produced on irregular flans, and as a result good all round examples are expensive and highly prized by collectors today.